The story of the science fiction novel Roadside Picnic by Arkady and Boris Strugatsky (mostly known via Tarkovsky’s 1979 film Stalker) takes place after an extraterrestrial event called the Visitation. Some aliens stopped by, made a roadside picnic, and left behind plenty of weird and dangerous objects having features that contemporary science cannot explain. Although the UN tries to prevent people from entering the visitation zones before everything gets fully explored and explained, objects from the zone are traded on a black market. Soon, the semi-legal discoveries from the zone find use in the industry without anyone having a good understanding of how the mysterious objects and materials work.

I got a very similar feeling from this year’s ACL as from this novel. In my not so elaborated analogy, the advent of deep learning is the extraterrestrial event, of course. Now, years after, we try to do now is make sense of what happened, some try to figure out if it is not dangerous and some try to make some money out of it. No wonder that the best papers at the conference, both those that the organizers recognized as the best ones and those that I personally liked the most, did not push the state-of-the-art by a large margin but brought some interesting insights and reflected the inventions of previous years.

What changed my beliefs

Few papers changed what I previously thought were the solid truths of NLP I would not hesitate to write in a textbook for the next 5 years.

When Do You Need Billions of Words of Pretraining Data?

They train a dozen of RoBERTas on different data sizes. For syntactic tasks, ~10M words pretraining is enough, for semantic tasks ~100M words, for common sense (here, Winograd) billions of words are necessary (no matter how we probe). For SuperGLUE not even 30B is enough…

Figure 1 from the paper: 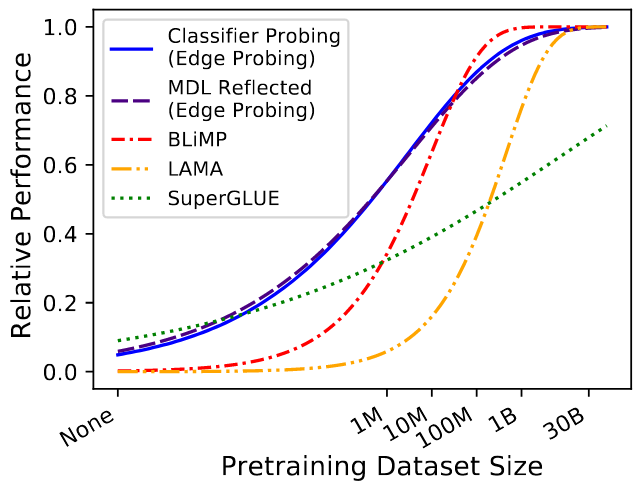 The paper introduces a methodology of measuring the sensitivity of models to sentence reordering and they found out that NLI is surprisingly permutation invariant, but the invariance indeed depends on how similar it is to the original order. This is quite a cool extrinsic measure of how contextualized a model is, by sort measuring its distance from bag-of-words models.

Dataset for multilingual fact-checking. mBERT works fine within a language, metadata help, Google search helps. But once we do it cross-lingually, it does not work almost at all.