This week, I will comment on a paper that quantifies and exactly measures the dimensions of the elephant in the room of machine translation: the lack of empirical support of claims in research papers on machine translation. The title of the paper is Scientific Credibility of Machine Translation Research: A Meta-Evaluation of 769 Papers, it has awill appear at this year’s ACL.uthors from NICT in Japan and was awarded as an oustanding paper ACL 2021.

The authors manually annotated an incredible number of papers and looked for the methodological mortal sins of machine translation:

The papers could get one point for doing each of these things right. Figure 6 of the paper shows how the evaluation thoroughness degrades over time, except for the last year when the discussion about automatic metrics for MT evaluation became more prominent again. 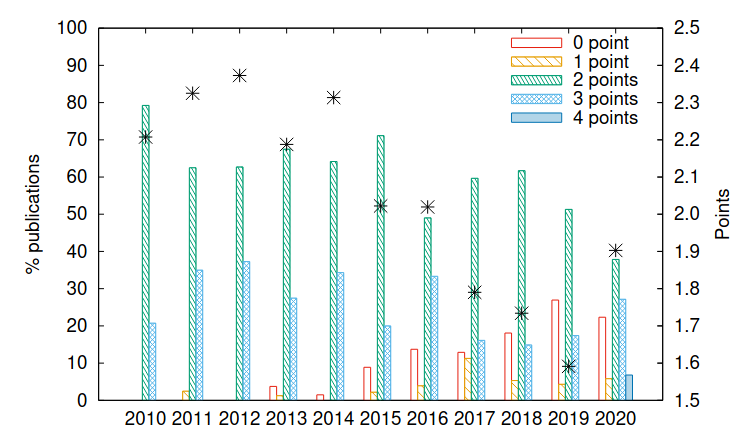 But there also other disturbing things. For instance, the paper shows that tiny details in model training that are usually omitted in papers can lead to differences in BLEU scores that were considered significant in many papers that claim some improvement. On the other hand, the annotation only considered the papers themselves. Many papers publish also their source code and those details might often be obtained from the training scripts.

I wonder what the reasons are that the paper authors became so negligent about the evaluation and the paper reviewers became so indulgent at the same time.

The drop of the evaluation thoroughness coincides with the advent of the deep learning methods in machine translation. I believe that part of the reason might be that people tend to imitate what they think are the most influential papers and what are the foundations of the methods they use. Here, the most influential papers were those that introduced the architectures, papers by Sutskever et al. (2014) and Bahdanau et al. (2015), often leaving out the pioneering work Kalchbrenner and Blunsom (2013). The thing these papers have in common is that their main message is that the architectures they introduced do at least something interesting. They did not have the ambition to show their models were significantly better than the state-of-the-art statistical MT at that time, they wanted to show their results are comparable and worth of future research. From that perspective, the evaluation in these papers was just enough.

Soon after that Rico Sennrich came with two crucial innovations: back-translation and subword segmentation, the preprints appeared on arXiv in August and November 2015. The gains from using these techniques were so large that there was no doubt the differences are significant. A similar situation appeared when the Transformer architecture was introduced. These papers are those that established the new paradigm in machine translation. None of them did a very thorough evaluation because none of them needed it. It is possible that they unintentionally created a model of “good” neural MT paper that other papers followed.