Papers about new models for sequence-to-sequence modeling have always been my favorite genre. This week I will talk about a model called EDITOR that was introduced in a pre-print of a paper that will appear in the TACL journal with authors from the University of Maryland.

The Levenshtein Transformer can be viewed as a mixture of both approaches. Output tokens are generated sort of in parallel—but at the same time, they are conditioned on the previously generated tokens. When generating a target sequence, the Levenshtein Transformer starts with an empty sequence <s> </s>, and using insert and delete operations, it improves the output. It is trained using imitation learning with an oracle policy defined by the optimal sequence of edit operations in Levenshtein distance (given that substitution is not allowed). It means that the first step is basically the standard non-autoregressive machine translation. In the next iteration, deletion and insertion operations are applied to improve the first translation that sufferers mostly with fluency problems, and more iterations are possible. Levenshtein Transformer matches the translation quality of autoregressive models while still offering some speed-up.

EDITOR is very similar to Levenshtein Transformer. The main difference is that the EDITOR uses a different set of edit operations. Instead of deletion, EDITOR uses a rather unintuitive operation of reposition. Here, reposition means that we take a token and move it to a different place, and rewrite the original one. In other words, the only way of deleting a token is to replace it with another one that already exists in the output. The reason for introducing such an operation is that it can be well used for inducing lexical constraints in the translation. For instance, based on a domain-specific glossary, we would like some terms to appear in the target sentence. Instead of starting with an empty sequence, we can start with the words that we would like to have in the target sentence and let the model do the rest. As with the more standard deletion and insertion operations, the optimal sequence of operations can be computed using the dynamic-programming Wagner-Fisher algorithm.

In general, the translation quality and speed are approximately the same as with the Levenstein Transformer. However, because deleting tokens is not as simple in the EDITOR, it works better for translation with lexical constraints with faster decoding than with standard autoregressive models. The translation quality with the lexical constraints is still better than with a method called Dynamic Beam Allocation, which is on the other hand rather slow at the inference time. 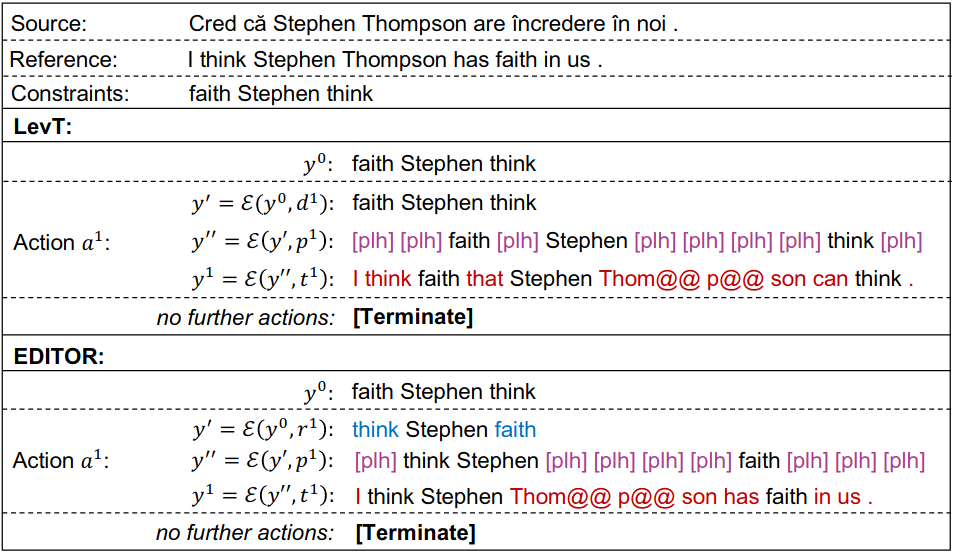 How the model works can be best seen in Figure 7 of the paper. The model was asked to use the words “faith”, “Stephen”, and “think” in a sentence. In the first step, the Levenshtein Transformer decides not to delete anything, EDITOR mutually repositions “faith” and “think”, so nothing gets deleted and the words are swapped. In the next step, both models generate placeholders where new tokes can be inserted. In the third step, tokens are inserted at the places of the placeholders.

I like the model non only because I have a soft spot for the dynamic programming algorithm incorporated in neural models. I believe this model will find use in several applications beyond machine translation, such as natural language generation in dialog systems or automatic paraphrasing.