Another large NLP conference that must have taken place in a virtual environment, EMNLP 2020, is over, and here are my notes from the conference. The ACL in the summer that had most Q&A sessions on Zoom, which meant most of the authors waiting forever if someone takes the courage to enter the room. EMNLP sort of simulated the standard conference format that hopefully reduced the communication barrier. There were public Q&A sessions with short presentations and poster sessions in a tool called Gather.town – a virtual environment with the look and feel of a 90’s video game. As an avatar, you can have walked from a poster to poster and talk to people. It seemed quite weird at the beginning, but looking back, I must admit I almost have false memories of talking to people at a real poster session, so it probably worked quite well. 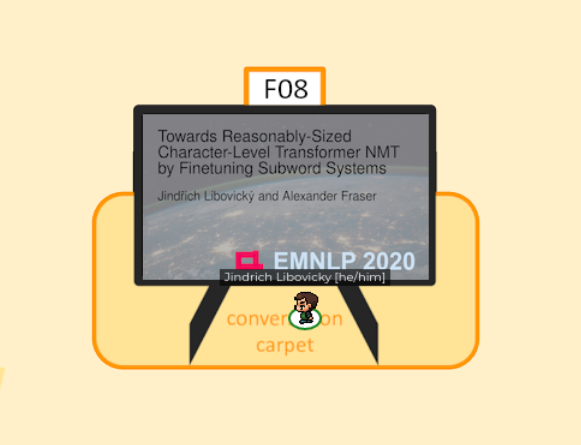 Brief comments on presentations I found most interesting

This paper was awarded with the best paper award and it totally deserves it. The task in the paper is: put 8 electrodes on a persons’ face, the persons move their face as if they spoke, and a system is supposed to reconstruct what they say. The paper presents a large dataset of the records from the electrodes collected in the two setups: vocalized (the people really speak) and silent (just move their face). By aligning the vocalized and silent electrode signals, they can generate a synthetic vocalized signal that they use to generate the speech. To my surprise, the intelligibility of such sentences is only slightly above 30%. However, it is still 3 times better than previous work.

The task in this paper is transferring a model (for any NLP task) from a high resource language to a low resource language for which we do not even have a pre-trained representation model. The main idea is stacking adapter layers and exchanging already train adapter layers. The adapter is an added feed-forward sub-layer into the Transformer architecture that is trained while keeping the the parameters of the rest of the model fixed. Because of the fixed parameters around, it is forced not to diverge from the representation space of the original model, which makes the adapter exchangeable. The trick they do: (1) train language-specific adapters for all languages they need to work with and (2) train task-specific adapters when the language one is frozen. Then, they can do the transfer by changing the language adapter and keeping the task adapter.

Standard beam search approximates the breath-first search by only keeping k best options in each step. The proposed algorithm is sort of closer to the depth-first search. At each step, it keeps k best candidates, but only expands the globally best one (stored in a priority queue). With a monotonic scoring function, this leads to the same result as the standard beam search in a much smaller time, especially for large beams. It works also with length normalization (which makes the scoring function non-monotonic), but I did not really get why.

In this paper, the authors make the non-autoregressive translation (MT that generates all output words in parallel) locally autoregressive. Every hidden state initializes a small RNN that generates several tokens, but still, all the mini-decoder can run in parallel. Then they run a clever dynamic programming algorithm to merge the generated segments. The proposed approach reaches much better translation quality at a similar speed as other non-autoregressive methods.

The paper is a manifesto asking to rethink NLP tasks (and AI tasks in general) having the following question in mind: Is knowledge about X most richly encoded (A) in existing texts or (B) in the physical or social world? If B is the case, we are unlikely to learn the task X satisfactory from text alone without allowing the model to interact with the physical or social environment. I would paraphrase their argument as: The ability to interact with the physical and the social world is natural to us (and everything seems self-evident before we start to philosophize), so we do not need to write long texts about it (unlike for instance about physics, biology or politics). Therefore, there is no text, our models can learn this from. (And even when there is, it uses philosophical or scientific jargon that is too distant from everyday experience, so that it is useless anyway.)

The paper explores multilinguality in a clever small-scale bilingual setup with English and Fake English (that only has all IDs shifted). They find out that: (1) Sharing position embeddings and special symbols is crucial; (2) Reverting the order of one language breaks everything (it perhaps suggests that positional embeddings learn some information about the sentence structure); (3) Too many parameters prevent the model from generalizing and it learns each language separately. Further, they add another trick in the training: instead of simply masking the inputs, they use the nearest neighbor from unsupervised word embeddings and get much better language neutrality. They apply all these findings also in a large-scale English-German-Hindi model and come to the same conclusions.

Current pre-trained multilingual models use vocabulary that is shared among all (i.e., around 100) languages. Vocabulary sharing is desirable because it helps the models to learn similarities across languages, but it discriminates against languages with unique scripts such as Korean or Japanese. The paper presents a work-around: train shared vocabularies for clusters of similar languages. The similarity is based on the monolingual SentencePiece overlap, so it is beautifully language-agnostic. On the other hand, it requires knowing the language in advance. However, the resulting model is much more language-neutral than without using this trick.

A dataset of Amazon reviews in multiple languages, primarily designed for experiments with the zero-shot transfer of classifiers trained on one language. Beyond what the authors say, it can be used for evaluation of how sentiment-preserving MT is or whether we also transfer culture when we transfer across language.

⑨ BLEU might be Guilty but References are not Innocent

Because of the way of how we get references, they argue that maximizing BLEU means aiming for the most average human translation, i.e., the most translationeese ones. They created more natural paraphrases and the automatic metric correlates much better using those. The paper raises a provocative question: if all results in the field are based on comparing against suboptimal references, didn’t we dismiss some good ideas?

Research from the world where neural networks were not invented. The paper takes some tricks from neural networks to make HMM large. They group words into clusters (Brown clusters, no embeddings, this is a paper from the world without neural networks) and only allow groups of states to emit words from one cluster. This turns the transitions to block matrices only. They also use state dropout during training, so the model needs to learn to recover from being in the wrong state. This must be quick as hell, however, the paper does not show a comprehensive speed comparison.

They formulate sequence-to-sequence transduction as applying a sequence of edit operations with a custom representation of the edits. They are triplets of: edit type, edit span length (start is implicitly computed from previous spans). Further, they modify the transformer decoder to have sublayers to predict (1) the operation type that goes as input to the next sublayer, (2) the operation span using a pointer network, (3) predict what to do with the span. Works excellent for tasks such as grammatical error correction.

Method for evaluating word sense disambiguation in machine translation. First, they identify homographs in the training data: nouns that get translated differently. Then they identify attractors: words that strongly correlated with the the distinct translations (hot spring vs. Prague spring) and thus indicicate the word was used in a different sense. They use this to create a challenge set: manually modified sentences, such that the sentence contains an attractor corresponding to a different sense than the one used in the sentence. The experiments reveal that current NMT uses almost exclusively these shallow clues to disambiguate word senses.

⑬ How do Decisions Emerge across Layers in Neural Models? Interpretation with Differentiable Masking

The goal is to find out what activations in the neural network are responsible for generating the output, ultimately what parts of the input influence the output the most. The method is a clever mathematical formulation of masking out some network activations and observing what effect it has. Using constrained optimization (and Lagrange multiplicators), they want to mask out as many activations when keeping the KL divergence between the outputs of the original and the masked as small as possible. On a toy problem where they know what the model does, they show this method works much better than previous ones. On real tasks, they show what really matters for existing models.

⑭ The Grammar of Emergent Languages

They take an emergent language from a game of two neural agents that need to communicate using discrete symbols (the game is of course an extremely poor simulation of communication needs that natural language can satisfy). The paper tries methods of constituency grammar induction on these languages. They found out that syntax-like structure emerges only with sufficient length of messages and a sufficiently large vocabulary, otherwise the code seems unstructured. The symbols tend to behave more like characters than words, as opposed to what most people would suspect.

⑮ Spot The Bot: A Robust and Efficient Framework for the Evaluation of Conversational Dialogue Systems

The paper presents a new methodology for the evaluation of chat-bots, I would call it a non-binary version of the Turing Test. The annotators are asked to judge if an answer is an authentic human response or if it was generated by a chatbot. In the Turing Test, the question is if the systems are distinguishable at all. Here, they measure how many turns can the chatbot survive before being busted as a non-human. It appears to be a fast, cheap, and reliable way of human evaluation.