This week, I will briefly have a look at a paper that discusses another major problem of current machine translation which is domain robustness. The problem is very well analyzed in a paper from the University of Zurich called Domain Robustness in Neural Machine Translation that appeared on arXiv earlier this week.

Given that MT is approached using machine learning, domain robustness is just another fancy word for preventing overfitting to training data—although in this case a special kind of overfitting. It is not surprising that a system trained on EU legislation, movie subtitles and crawled web pages (which is what most parallel corpora consist of) will underperform on text for medical professionals full of expressions that are hardly understandable for the public. What is really stunning is how exactly the systems usually fail. They tend to hallucinate fluent text that has nothing in common what was in the source sentence. The paper shows an excellent example of that. 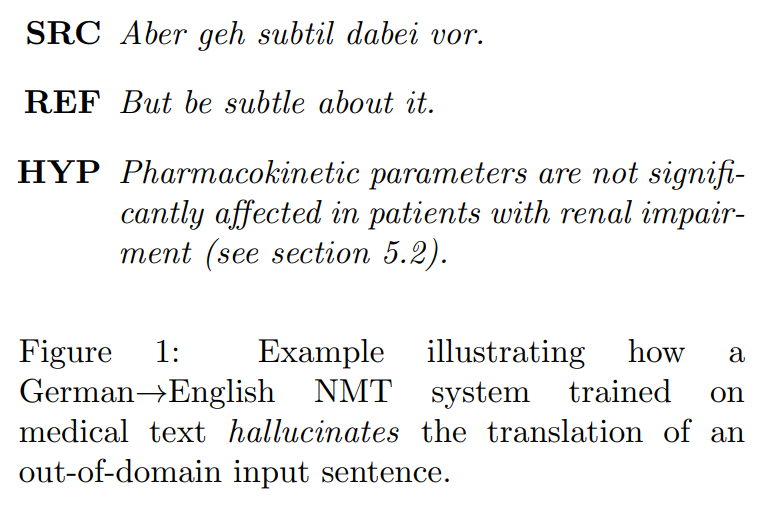 Statistical machine translation that was the state of the art before 2016 provided worse translation quality in general, but it would never produce such spectacular nonsense.

In the paper, they play around with several methods that should help with this problem of hallucinating nonsense sentences.

And… Yay, it works! The combination of the reconstruction regularization and sub-word regularization gets the best results on both in-domain and out-of-domain data and outperforms the good old statistical systems probably in the last discipline for which it worked better than neural networks.

Another technique they tried and got quite results was knowledge distillation. It is a technique where they first train one model, translate plenty of data with the model and train another model on this generated synthetic data as training data. My intuition would be that the model does not have any chance to learn anything new that was not already in the first model. On the in-domain data, the translation quality indeed does not change, but it significantly improves on the out-of-domain test data. And I have no idea why. I would understand if they would try to distill what they could get from the relatively complex noisy channel pipeline into a simpler model, but if I understood the paper correctly, they only use a vanilla model for the distillation. If the teacher model hallucinates nonsense sentences, why does not the student model learn it as well?