With the ACL camera-ready deadline slowly approaching, future ACL papers start to pop up on arXiv. One of those which went public just a few days ago is a paper called Analyzing Multi-Head Self-Attention: Specialized Heads Do the Heavy Lifting, the Rest Can Be Pruned written by quite a diverse group of researchers from University of Amsterdam, University of Edinburgh, Moscow Institute of Physics and Technology and Russian company Yandex.

The paper analyzes the encoder of the Transformer models for machine translation and tries to get to the bottom of what the self-attention heads in the encoder do. The self-attention is known to capture some linguistic phenomena, but most of the attention heads learn to do “mysterious” operations that no one can really interpret. It is indeed tempting to think that this is one of the things that make the Transformer such a powerful model. However, this paper shows that exactly these heads are the most superfluous ones and if you (cleverly) remove them from an already trained model, the translation is quality is not harmed at all.

The paper classifies the attention heads into several categories. In the first category, there are position heads, systematically attending to surrounding words at a fixed relative position (the Transformer is by design not aware of word order and needs to learn it). The second category consists of so-called syntactic heads. The authors came up with a clever technique (which might be enough for a separate paper) and detected heads that reach the maximum values when attending from one syntactic category to another one. There are heads identifying object-verb relation, heads attaching verbs with adverbial modifiers, etc. In the third and last category, there are heads attending to statistically rare words. It is hard to say why they are there, perhaps because the rare words tend to say a lot about the topic of the sentence.

After that, they used Layer-wise Relevance Propagation, a technique that estimates the importance of particular neurons for the network output (a really cool thing, I had no idea it existed until now) and also measured how sharp the attention distributions are. And, amazingly, the most important heads according to relevance propagation are those with the sharpest distributions and exactly those from the three categories as is shown on a picture in the paper (the picture is taken from the paper, page 3, figure 1).

This might have been enough for a decent paper, but the story does not end yet. The paper introduces a clever technique for learnable switching off the attention heads. There is a gate added to every attention head (something similar to the Gumbel-softmax) which makes a hard 0/1 decision whether the head is used or not. However, the decision is still differentiable and the gradient can get through during training. It is used for a multi-task model fine-tuning which with two objectives: first, switch off as many heads as possible (maximize the gate probabilities), and, second, minimize cross-entropy of reference sentences (i.e., the standard way of training MT). The more weight is given to the first objective, the more heads get switched off. The experiments again show that the heads from the already mentioned categories tend to survive and the “mysterious” heads are the first ones that get removed, and importantly, it barely influences the translation quality. This is shown on a diagram with the number of remaining heads on the horizontal axis and head categories on the vertical axis (the picture is taken from the paper, page 7, figure 8). 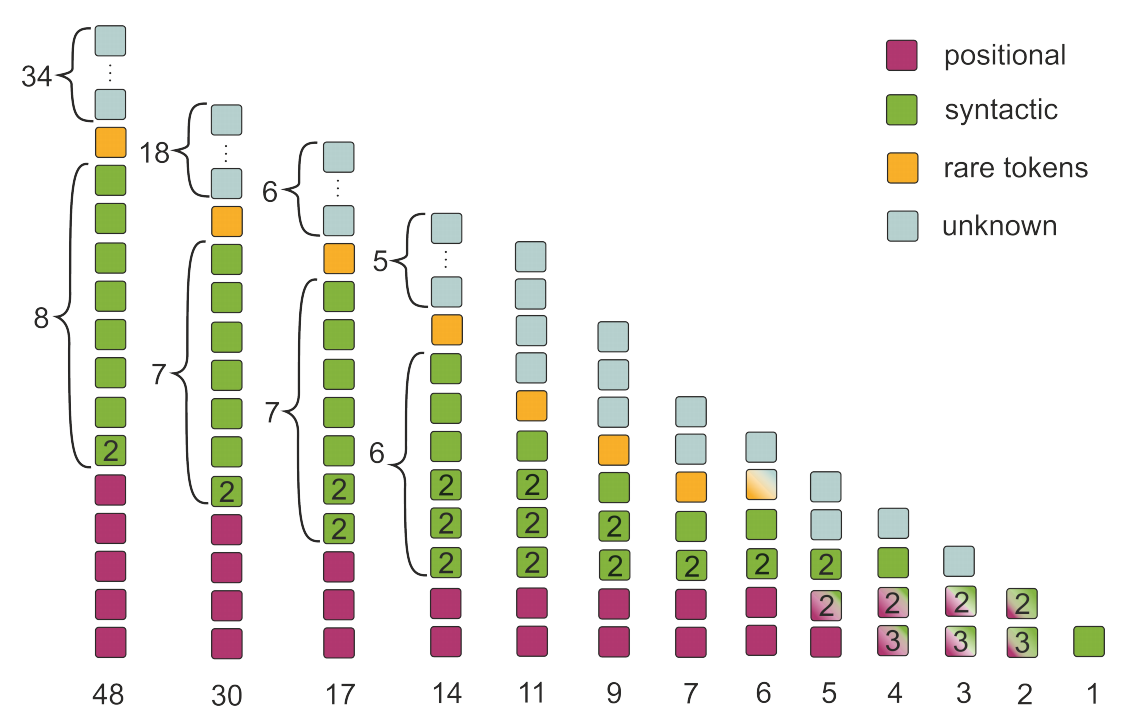 At first glance, the method seems a bit over-engineered, but just removing one of the heads without fine-tuning would certainly break the model immediately. Even if the “mysterious” head only generated noise, the rest of the network would be tuned to the particular type of noise. In fact, this is truly an elegant way of learning to remove something from a neural network without doing much harm.